Attorney Charles Huggins is well known in his hometown of Augusta as an avid musician who loves family, his community, and …coffee. But family and community, of course, reigns above a good cup of cappuccino. Quality of service, approachability and integrity signify how Huggins runs his law firm and how he embraces his community. Once you step into his office, you will feel the sense of comradery among the staff that is also graciously extended to every client and the community.

Huggins Peil, LLC traces its roots to the law firm of Huggins and Allen, P.C., which was founded in 1981 by Charles “Tom” Huggins Sr. The elder Huggins spent the majority of his practice with this firm, specializing in real estate law. Attorney Tom Huggins was known by his friends and business colleagues for his keen intellect, quick wit, and genuine humility, and was highly regarded as a leader in both his profession and community.

While the elder Huggins is no longer with us, his son, Charles T. Huggins, Jr., and Jeffrey F. Peil are carrying on his legacy of providing exceptional legal representation at fair prices.  There is no case too small or too large for Charles and Jeff to consider.

If you want something as simple as a will or something as complex as taking on the United States Government in federal court, the lawyers at Huggins Peil will sit down with you and find the best course of action. 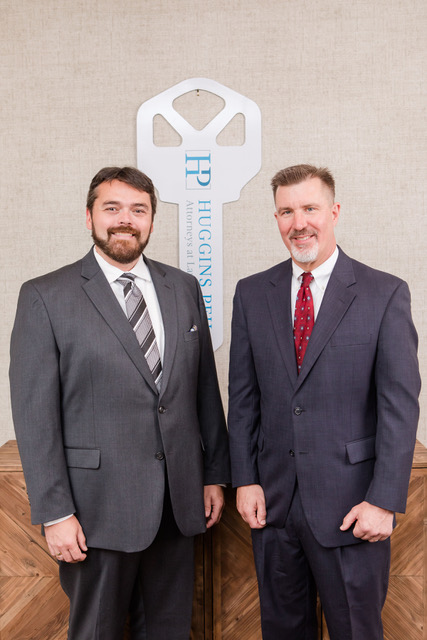 Charles T. Huggins, Jr. is carrying the family torch and interacts with every client with compassion and integrity while providing the highest degree of legal advice. Huggins graduated with a Juris Doctorate in 1992 from the University of Georgia, School of Law. He earned a double Bachelor of Arts degree in History and Sociology from Furman University in 1989. Currently he is a member of the Georgia State Bar, Real Property Law Section, and the Augusta Bar Association. Charles is married to Elizabeth (Beth) and they have two adult daughters, Catherine and Caroline (Callie).

Attorney Charles Huggins is well known in his hometown of Augusta as an avid musician who loves family, his community, and …coffee. But family and community, of course, reigns above a good cup of cappuccino. Quality of service, approachability and integrity signify how Huggins runs his law firm and how he embraces his community. Once you step into his office, you will feel the sense of camaraderie among the staff that is also graciously extended to every client and the community.

Since Jeffrey joined Huggins Peil in 2014 he has helped his clients recover millions of dollars in a wide array of cases. He has also helped corporate clients defend against all types of claims in courts across the United States. As representative examples, he has:

Jeff lives in Grovetown, Georgia with his wife Hilary. Both are active members of the Church of the Good Shepherd in Augusta, Georgia.

Ryne joined the Huggins Peil team in November 2022. He is an experienced trial attorney responsible for convictions resulting in seven life sentences for seven separate criminal defendants in 2022. Ryne started his practice in Georgia as an Assistant District Attorney in the Augusta Judicial Circuit where he successfully litigated hundreds of felony cases from indictment through sentencing.
Ryne has litigated and taken to trial with successful outcomes the full spectrum of criminal cases ranging in severity from DUI and Suspended License Offenses to RICO cases, Gang Cases, Armed Robberies, and Murders. He quickly gained such experience after demonstrating a skill set well suited for trial work.
While an Assistant District Attorney, Ryne was quickly promoted to the Trial Team Leader where he weighed the merits of cases and determined which docketed cases would receive priority for trial. He was again promoted to being a Major Violent Crimes Prosecutor where he had overwhelming success at trial in the most serious cases in the Augusta Judicial Circuit.
All of his experience proving difficult cases beyond a reasonable doubt led Ryne to notice that there is a strong need for a strong criminal defense attorney in the CSRA. Having heard of defendants floundering in jail for months on end without contact from their so-called defense counsel, Ryne decided to answer the need for a damn good lawyer who can listen to, counsel, and fight for the constitutional rights of clients that find themselves in a bad situation.
Ryne is a black belt martial artist and has developed a particular expertise in the affirmative defenses of justified threat of force and justified use of force pertaining to issues of self-defense, defense of others, and home defense.
Ryne K. Cox is eager to use his trial advocacy skills to reach favorable outcomes for his clients whether by trial or favorable negotiation in the following practice areas:

Nicole Wilson joined Huggins Peil, LLC in February, 2018 after obtaining her Associate’s Degree of Applied Science in Paralegal Studies from Augusta Technical College. Her previous five years of experience in Augusta’s Legal community has prepared her well for working closely with Huggins Peil clients in a variety of roles.

Nicole grew up in Augusta, and is now a proud resident of Columbia County along with her husband Jack and daughter Alexandra.

Michelle Rhodes brings over 20 years of experience working in real estate firms. As her co-worker explained, “she is an expert in all things real estate.”

Michelle prepares all commercial and residential real estate transactions and serves as the closing secretary. She is married to Scott Rhodes and is the mother of two boys, Burke and Brandon.

Miranda Dally-Schmitt joined the Huggins Peil, LLC team in March, 2020 as a Paralegal. She obtained her Associates Degree of Applied Science in Paralegal Studies from Augusta Technical College in 2019. Miranda supports the attorneys within the firm in multiple areas of law including Personal Injury, Wills and Probate, Litigation and Family Law. Her efficiency keeps the Legal machine running smoothly at Huggins Peil.

Miranda and her husband Nick have one daughter, Debbi. They also have a granddaughter, Braelynn, born November 2022.

Marya Blackledge, born and raised in Evans, Georgia, joined Huggins Peil, LLC in January of 2020 as an Administrative Assistant. She obtained her Associate’s Degree in Science, General Studies from Georgia Military College in 2012.

Marya is always ready to greet you with the sweetest of Southern Hospitality, whether it be at our door or on the phone.  When not at work, Marya enjoys kayaking, paddle boarding, trips to the beach and spending time with her family and friends.

Emma Arzate joined the Huggins Peil team in September 2022 as a Paralegal. She obtained a certificate in Legal Assisting from Kaplan University in 2017. Emma’s determined nature is a great fit for working closely with the firm’s professionals and their clients.

Emma grew up in West Georgia, and with her husband, Matt, recently settled in Grovetown after twenty years traveling the country with the military. In her free time, she enjoys hiking, knitting, baking, and spending time with her three children, Payten, Makenna, and Levi.